Common mistakes when fishing salmon on the Kola River. Part 1 - 2 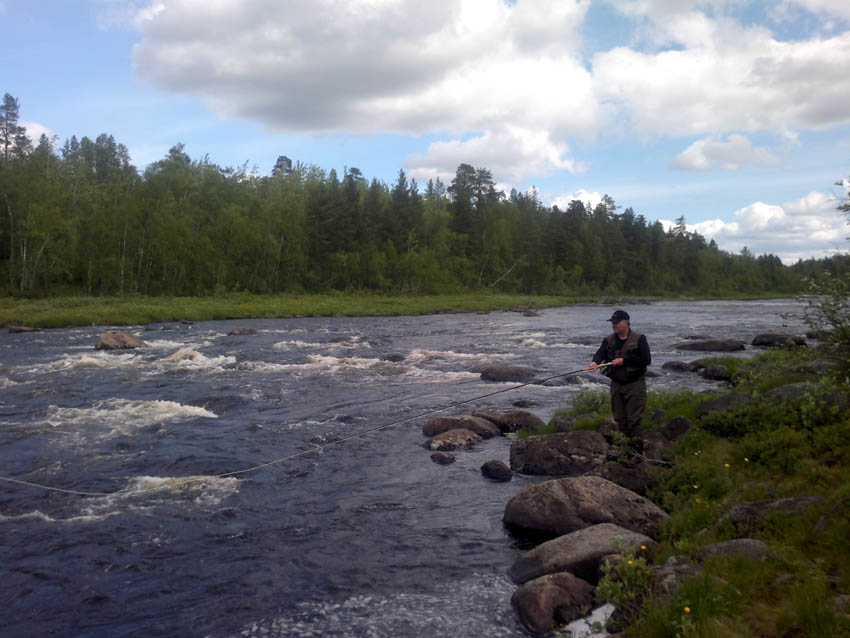 Kola river can not be attributed to simple rivers for fishing. It is quite large, especially at the beginning of the season when the water melts after the snow . The river bed is also quite varied. Along with large stretches there are a number of sites with fast current. The bottom of the river is lined with large boulders which often form a big difference in the depths. That is, the river is complicated enough for fly fishing, you need to know exactly where to enter the river, and where it is not worth your time.
Common fishing tactic is a long fishing in one place, at one shoal or reach, as the change of position takes a lot of time. In the presence of a large number of salmon that tactic is justified.
A feature of this year was abnormally hot weather in late May and early June. This may have led to a very sluggish movement of sea salmon in the river and to a drop in activity of the fish that were already in the river. Need to take into account the possibility of a cyclic change in the number of salmon that is extremely uneven in the river over the years.
Compared with 2012, the number of salmon in the river was noticeably smaller.
The first reaction to the changed conditions of fishermen  was an attempt to quickly change the fishing spots. It's a natural reaction to the absence of signs of salmon in the river, on the lack of response of salmon to the bait. Unfortunately, this tactic quickly change places has led to erratic and uncontrollable movements of fishermen on the river. As a result, some areas fished by 4-5 times during the day, other parts of the river have been used occasionally.
As a result, fishermen who used the night or early morning hours, doing better. It was important to be the first in a promising position, because it seemed that in some areas stayed only one or two salmon.

These features of the season in 2013 led to the need to change tactics fishing. Unfortunately, many anglers are not able to adapt to the new situation on the river. This applies to all three components of a successful salmon fishing.

First of all it concerned about search of salmon spots, identifying the most promising places for fishing. I have already mentioned that the search for salmon is a chaotic change sections of the river with huge losses of time by moving by boats, occupation of new positions and preparing tackles. We will not mention the situation when in one area there was an inadequate amount of anglers. Changes in water level in the river and a small amount of fish resulted in that it was difficult to determine the exact fishing spot at that moment. It was therefore totally unjustified tactics prolonged fishing in one place, at one position. A better tactic was searching salmon in the entire area available for fishing. To do this it was necessary to quickly process all the territory from the beginning of a promising perspective site to its end. In the absence of active fish, the remaining time to focus on the most interesting and challenging points of this section of the river. If it was not possible to detect salmon after repeating the search of the area, than it was necessary to change the section of the river, or take a different position, for example, fishing from the other side of the river. In this case, new points and salmon spots become available. Totally unjustified attempt to seek salmon on secondary sites or bayous. Here the chance to find salmon is much lower. It would be right after the first try of the river area to highlight the most important places where the appearance of the salmon is most likely. At low water levels, these places are fairly obvious. Identify them with some experience is quite easy.

The changing water levels, a small amount of salmon and its passivity has led to considerable difficulties in finding a prospective fishing places. Therefore significantly increased the requirements for the presentation of flies. I found it strange that a significant part of fishermen refused to change anything in the fishing technique, even after several days without result. With rare exceptions, most of the fishermen tried to just throw the line as far as possible. In this case, the basic technique is to Spey casting or its variants at a rather large angle to the river. This technique results in a high rate of lateral movement of the front sight. This technique is justified during high water activity is high salmon. Thus, it is possible to test a large area and to find active fish. But the technique is very sensitive at low water levels and low activity of the fish. If there are technical problems on the cast and incorrect positions of the angler, this technique does not bring results. Casting a transverse direction leads to unnecessarily rapid movement of flies after the cord. If you add an error in the exercise of casting, the flow of water straightens cord and undergrowth along the arc, and the front sight is developing an incredible speed. After casting about 20 meters across and downstream, fly passes about 30 meters in 5-6 seconds that are required in order to for our straightened cord directly below us down the river. As a result of casting bead moves diagonally at 2-3 - 4 meters per second. First, this fly can not be interesting for salmon. Second, the front sight very quickly leaves the prospective zone and goes to the bank. If you have taken the right attitude and perspective place is right below you in the river, then this technique may produce a result. After all, at the end of the presentation fly still stops and start working. But if you stand back from the forward-looking place, the flow takes aim at the shore. You're just wasting your time. There are two ways to correct the situation. It is best to use both these methods. First, take the position as close as possible to the center and closer to the salmon spot in the river. Second, apply Mending upstream. This way you can use your favorite places Harvesting throw an acute angle to the flow, significantly reduce the rate of lateral drift flies, hold it for a long time in the promising area. Finally you will minimize the effects of incorrect casting technique, in which cord lead undergrowth and falling water loops, which leads to loss of control over the bead and loss of operation time. In the end,the current will straighten the tackle  and the fly will begin to work, still not coming out of a promising band.


Monica Pool, one of the most easiest places to fish

The end of Loparskaja Pool


These features of the season in 2013 led to the need to change tactics fishing. Unfortunately, many anglers are not able to adapt to the new situation on the river. This applies to all three components of a successful salmon fishing.

As a result, fishermen who used the night or early morning hours, doing better. It was important to be the first in a promising position, because it seemed that in some areas stayed only one or two salmon.