Last year, in October and November     we observed intensive salmon course from the sea   in to the river. Therefore, we know that at the beginning of the season   a lot of overwintered fish stay in the big pools like Cable pool or Pokosy. Now the water level   turned out to be comfortable, and the water temperature gradually decreased after the May heat. A few cold days in early June led temperature to   decrease   from 14   to 11-12 degrees.     Water was   clear and transparent.
The first days of fishing have confirmed our fears that an unusual early spring and the May heat will affect the activity of  autumn run  fish. At the beginning of the season the biggest part  of   salmons we caught are fishes who have come into the river last fall. In the   cold water, they retain their activity and strength. They are distinguished by a light purple stripes on the sides and a little darker color of the back. The main problem is that fall fish   loses its activity quickly with increasing temperature of the water. The optimum temperature for spring fishing can be regarded as the temperature in the range of 7-9 degrees. If the water warms up quickly and exceed 10-12 degrees, autumn fish rarely appears on the surface, it loses activity and reaction  to the fly. So, now   fish left big pools  with calm water, where it is usually stays until mid-June, and moved to the typical summer place with stones and fast-flowing water. Since the water level was still high enough fishing conditions were difficult to call comfortable for every fisherman. Like last year, we had to move a lot along the river, choosing the most affordable areas for wading and casting. It was possible to notice that this week autumn salmon was   more active on the upper sections of the river. Some of them have already started to get a summer color ( end of May!)  and standing in the shallows near the spawning shoals. It also speaks about the unusually early onset of summer this year. Fresh fish from the sea was rising steadily and positioned evenly along the entire length of the river, preferring to park   on a typical summer swift current in the main channel and in the fall of water.

The average size of salmon  we caught in the end of May - first week of June, clearly exceeds the size of fish of last season. Autumn fish were from 3.3 to 4.3 kg, fresh sea fish sometimes weighed 4.5 - 6 kg. We   pay attention to the very good physical condition of these fish. I mentioned that there was   unusually high number of unhooked  salmons. For each one landed  salmon we had lost   5-6 fish. I want to note here that we do not use guides with a huge nets  in the middle of the river. We count the fish landed, if the angler  himself  fix salmon at the shore. A large percentage of lost   salmon could be explained in many ways. All we noticed a significant number of touches to the flies, the cautious bites. Among us again there was a discussion about the role of strike   or     loop of line near fly reel.  One way or another,  we have not come to a common opinion, as the fish continued to go off the hook. Our guide  George as usually  demonstrated   the best results, no one salmon lost,   may be he  use  extremely powerful  technique of fish landing   using short and very soft single hand rod.
A little about tackles  and flies. The water level was comfortable for   two-handed fishing rods 8-10 class, lines heads  from Spey to Skagit. Casting distance   ranged from 12 to 20 meters. The most effective depth of flies presentations was  0.5 -0.8 meters, the nature of the presentation -   cast in a narrow sector   downstream and very slow and insignificant lateral fly drift.  Therefore correct position of fisherman   is very important.


It seems that large fly in the standard black - red - orange colors with silver elements on the body  have been more effective.   Tubes  ( metal or plastic) and double hooks work well. This season surprise - my Shrimp   # 6-8 were not effective at this time.   May be medium size flies apparently not been sufficiently provocative for  autumn passive fish and for fresh   and   aggressive   salmon too. Although the situation on the river was changing  on  our eyes and we had to constantly change the tactics and techniques of fishing. 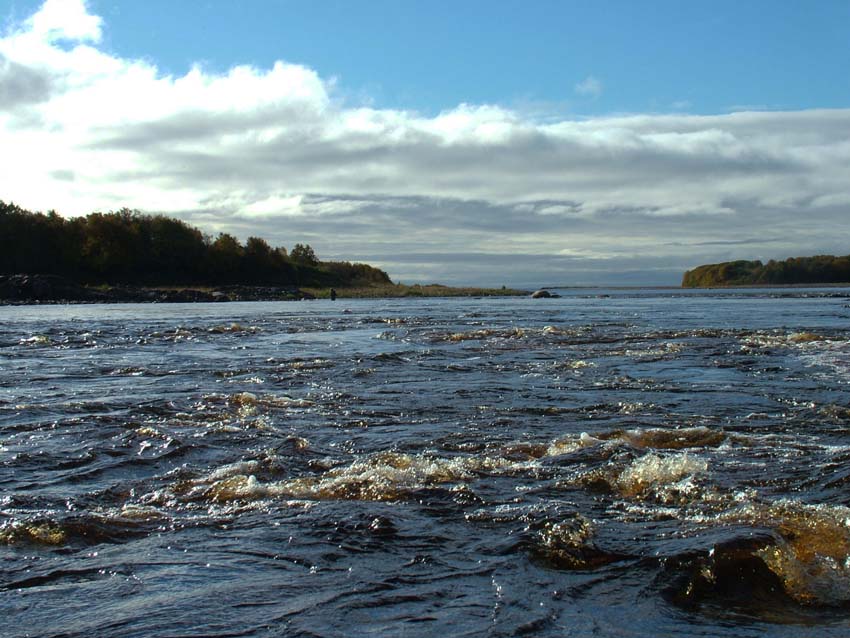 We still have only 2 vacant space on a super week of salmon fishing on the river Strelna! 22.09 -29.09.2016, helicopter program. Contact us, we are glad to inform you all the details. There is still time to prepare visas and travel arrangements. Good luck! 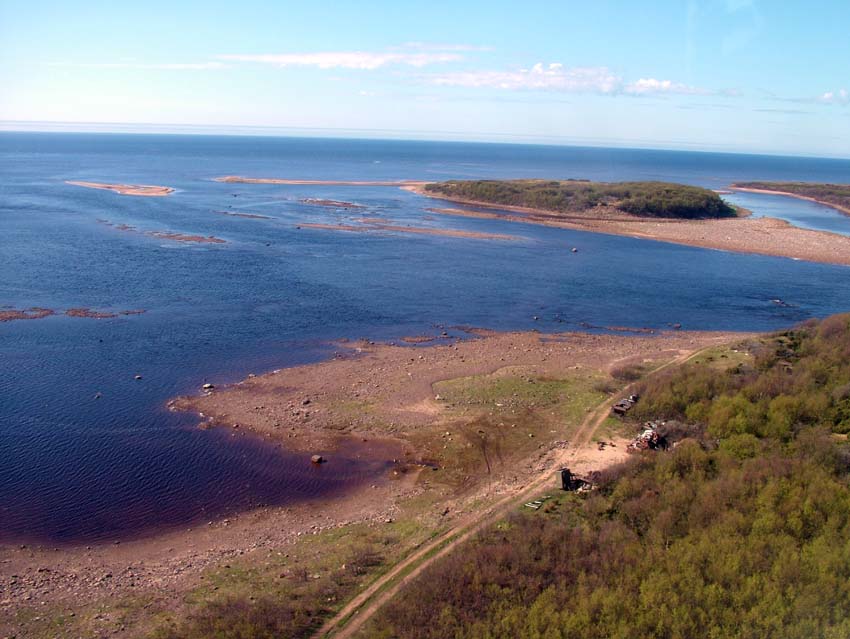 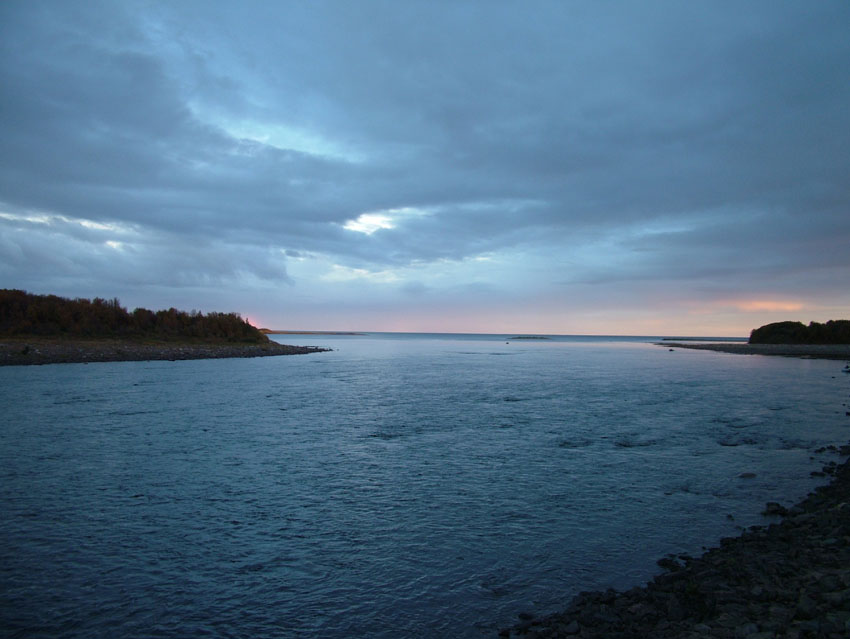 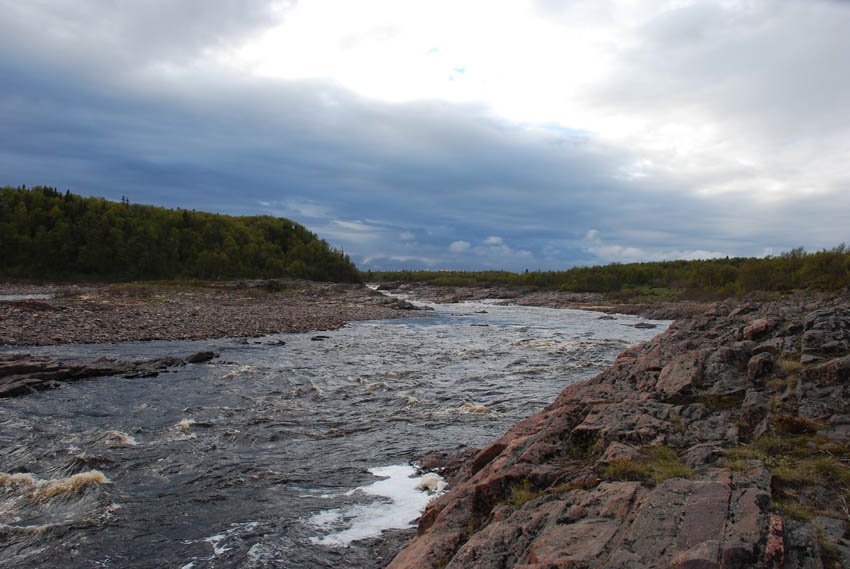 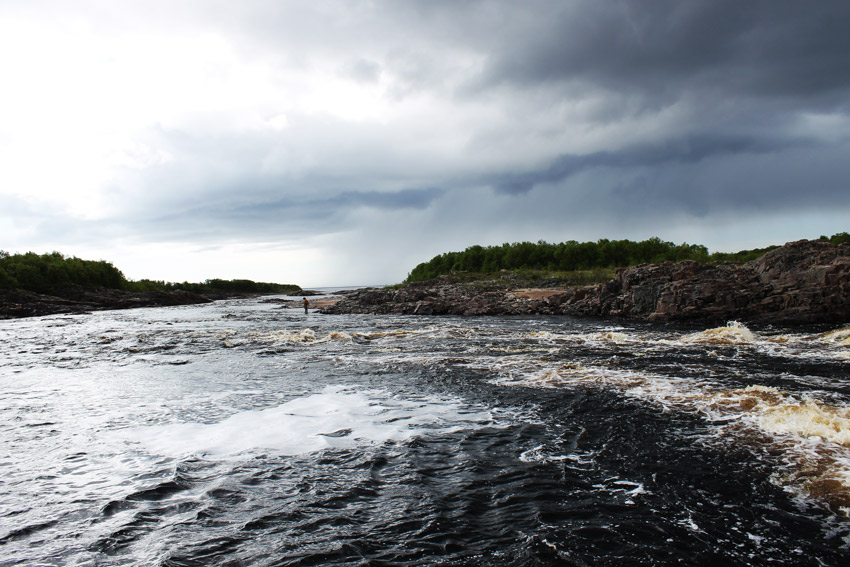 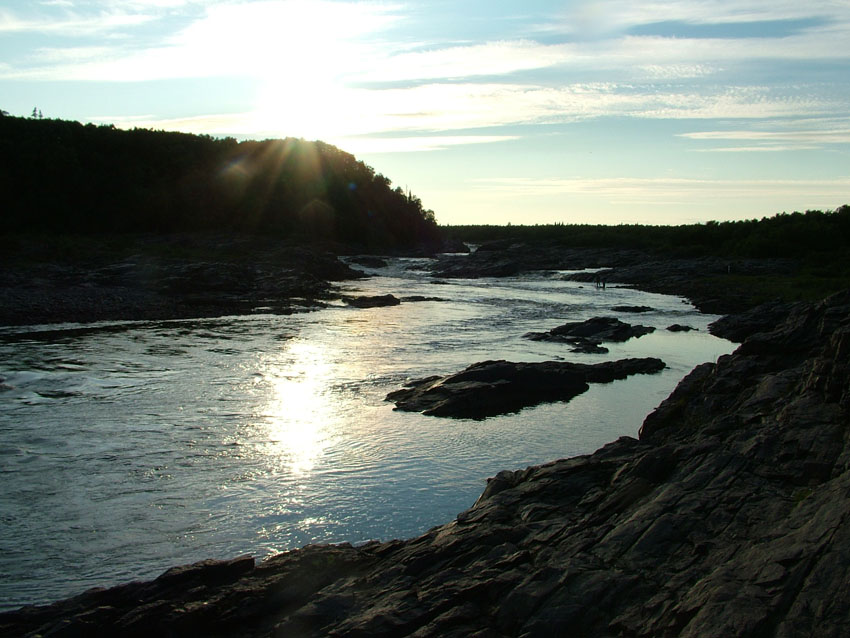 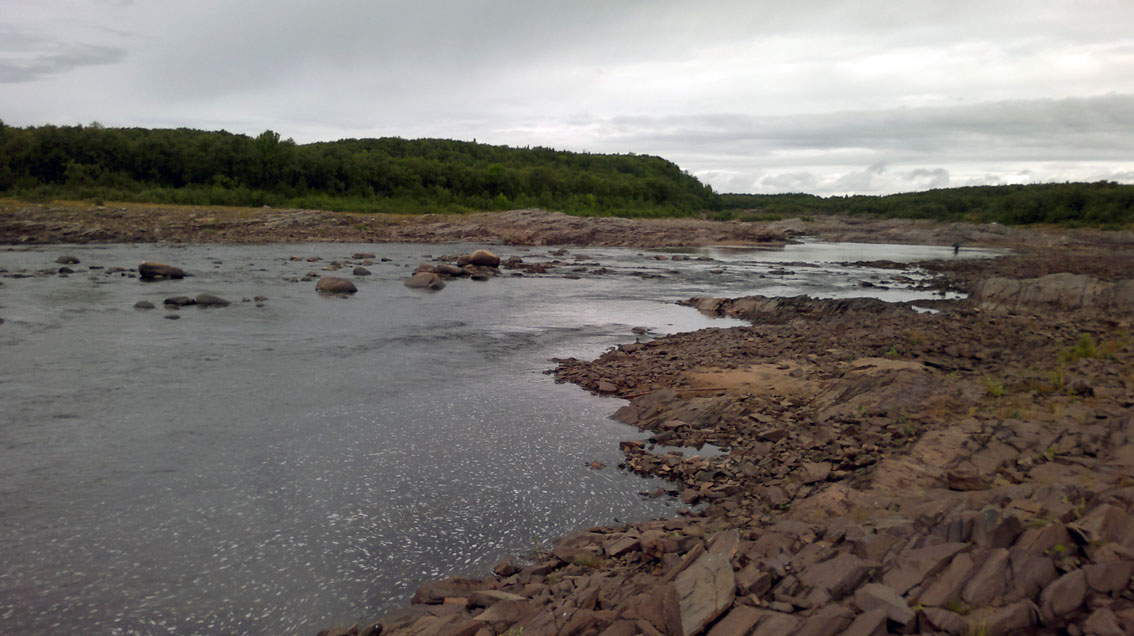 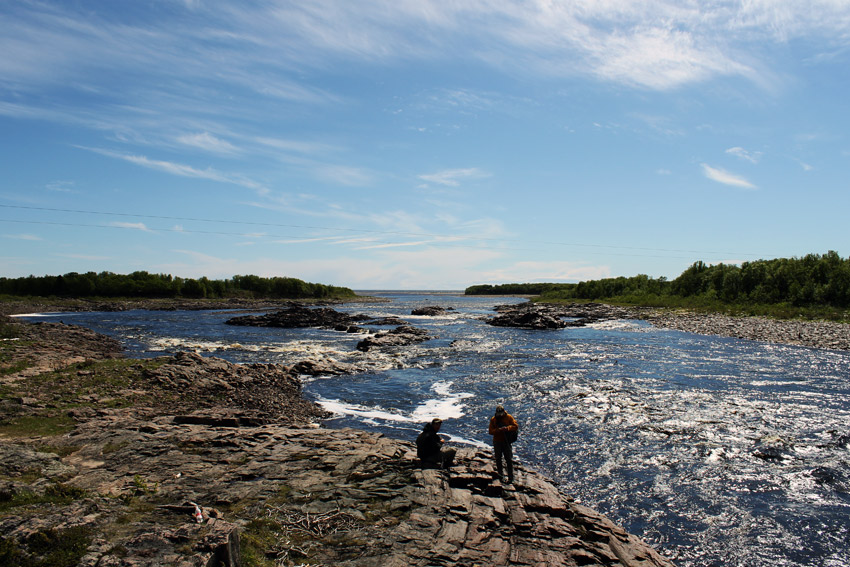 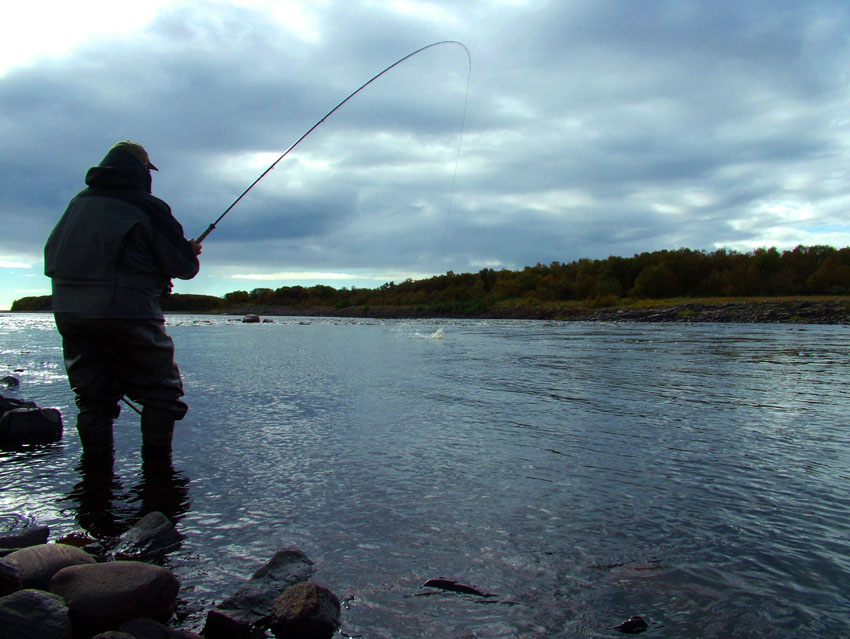 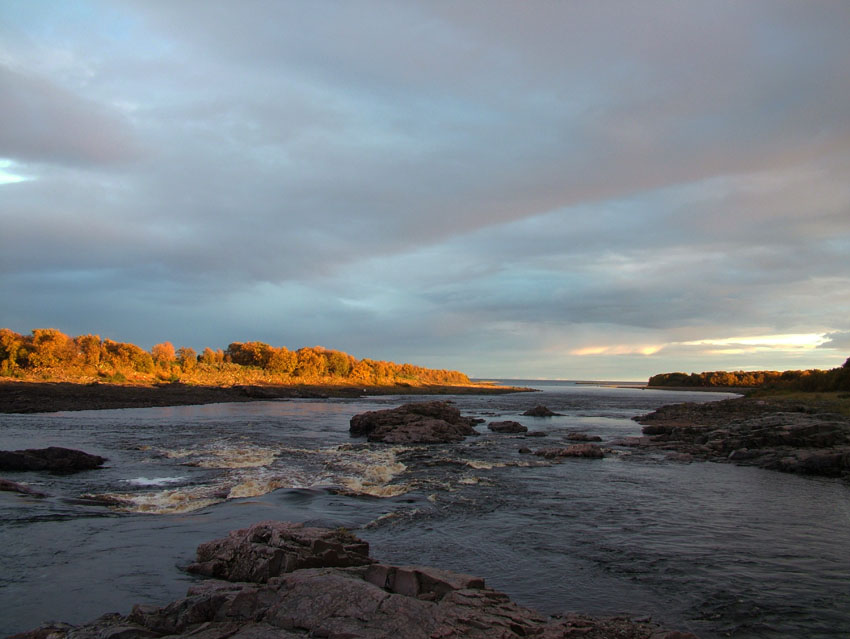 We are all eagerly awaiting the opening of our salmon fishing season on the Kola Peninsula. First of all we worried about the weather forecast, because the nature of the spring determines the conditions and the result of fishing during the first weeks of the season.
In our first program was listed Varzuga river. Unfortunately, we are not pleased with the news. Information received from local residents, has confirmed our fears. Spring has come too early, the river free of ice in late April. By the beginning of the season instead of snow along the banks we were met by flowers and green foliage. The water temperature has risen too fast and high, and the water level fell down. Salmons, who stood for the winter in the river, refusing to bite, they have left available to us stretches and spread out along the river. The concentration of fish and our chances to catch rapidly diminishing. It has happened before - too late for the salmon that entered the river in autumn and too early for a new fish.
However, fresh fish coming up the river, medium-sized salmon leaping on the shoals. We managed to catch a few fish. From the time I first drew attention to the significant number of empty strikes and fish off the hook, though, and did not attach special significance.
I can say that the total number of fishermen in the license areas Varzuga river decreased markedly. This is due primarily to the termination of the license catch&kill. This is certainly positive news for flyfishers, fishing pressure from local and visiting spinnings decreased markedly. But it is impossible not to notice that the number of boats, catamarans and rafts that come down the river dramatically increased. Apparently, the majority of anglers, moved to the upper and middle parts of the river Varzuga and its tributaries.

We have a short break to rest and I want to introduce you all the news about salmon fishing on the rivers Chavanga and Strelna. Every day we publish a new report. 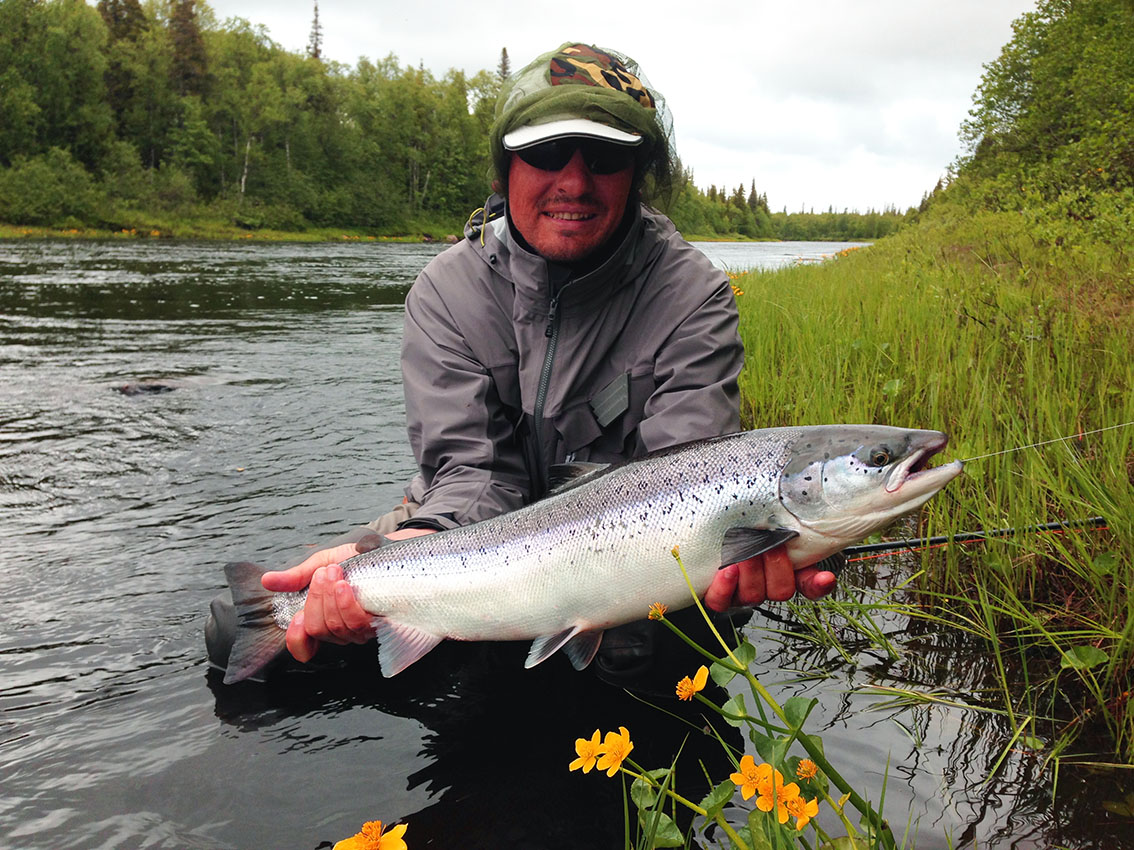