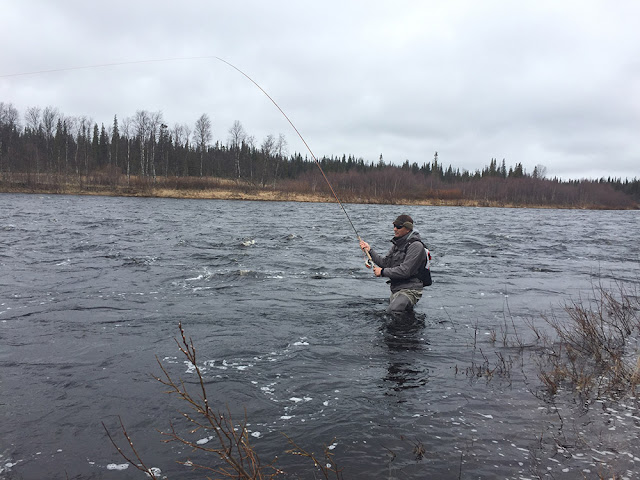 These problems become critical within the next days. With the stabilized level of water the water temperature has   a tendency to lower . After a night frost water has cooled to 6 degrees. It was noticeable that the salmon became harder to enter the river from the sea. Leaping salmon became visible around the lower portion of the river.

At the same time , it became apparent that in areas with fast flowing salmon flies become conventional to ignore when I  present it  near the surface. Perhaps the fish became less active and preferred to stay near the bottom. It is possible that some of it has to prefer areas with more calm and deep water. On this one might have thought , watching the cluster of fish jumping on the broad and deep places below the falls.

In this case, the most successful was the way to catch a salmon by  provocation    with fast motion flies  . Quick presentation of the fly up or   across the current often led to increased salmon and biting . The fish often come out to the surface with numerous , often ineffective bite. At the same time, has been steadily growing percentage of  bites and unhooking     after a few seconds of combat . Iin the case of   sunray shadow flies  we could think of too large   wings.

These days there is an problem with anglers who have had problems with casting . High or fast water can forgive errors in the execution of cast, but  now  the situation on the river proved to be particularly difficult for those who have used the standard two-handed  rods for Spey or Scandy lines. False casts or untidy drop  of the line  on the  water instantly kill fish interest in what happens . Some anglers used very long tippets , increasing the distance between the line and the fly . Another option was to shorten the leader and tippet    up to 2.5 meters and win in  presentation and  flies control  .I'm more like the second option, in which it is more convenient very carefully, systematically and carefully fishing on the entire territory of the pool. The use of long leaders and tippets   often leads to loss of orientation in the position of flies, which are very critical when fishing in restricted areas on the area of the river.