Different view on salmon fishing. Not so bad English.

There is one standard statement with which I cannot agree. It is considered that the Atlantic salmon does not eat in fresh water. Many do not understand the reasons forcing this fish to attack in the rivers every possible baits - flies, wobblers, metal lures, worms, pieces of pipes with hooks both other edible and inedible objects. Certainly, I will not begin to declare that fishes eat natural food always and everywhere. The fisher who cleans salmons, usually does not look at all in a stomach. The result after all is known - it will find the empty and slept digestive organs.
But there is a difference between an atrophy and hypotrophy. The concept «hypо» means possible restoration of function in some conditions. These processes are well studied on a sea trout who in a month after spawning again has a silvery colouring and so on. And the survived salmon by the spring has working teeth, silvery colour of a body comes back. It is noticed by fishers to whom fish coming back in the sea came across. Their stomachs have already started to digest sedges and other insects, it is the same forage which we find in stomachs of the trout caught in the same place. A multimonthly break in a food at all a rarity in life of fishes.
All this long introduction is written for the only purpose, to convince itself and others that it is impossible to look at a noble Atlantic salmon, as on a unique person in wildlife. There is no sense to ask a question: «Why the salmon attacks an artificial flies?» The salmon always was and will be simple fish with the set of instincts which define its reaction at the sight of our flies and lures. But while representation dominates that the salmon in the river "is not hungry, does not eat and does not search for food". For example, Malkolm Greenhalgh in articles for magazine "Fly Fishing and Fly Tying» does a conclusion about inexpediency of efforts on studying of this theme. He does not see practical sense in catching on imitating baits. Though in article the author himself ascertains the facts of obvious interest of a salmon to live insects.
Such representation about appetite of a salmon pushes us to search for a way to successful fishing in area only salmon flies, salmon tactics and technics of fishing. Lacks of this nonflexible approach have created weight of the errors, concerning motives of behaviour of fish. It has led to occurrence of set of salmon flies with not clear practical sense. Their classifications or division into groups can be understood, if it is a question of carriers, ways are viscous also materials. Someone has told that salmon flies exist, as a mix of impressionism with an expressionism, it reflects our subjective approach to business.
I have once again seen arguments of supporters of catching on salmon flies, arguments in favour of salmon flies. Fishing is a wide concept and "salmon flies" are entered in the settled term "salmon fishing" organically. And so, what practical value of this variety of flies? Even if the fly is adapted for concrete conditions of the river, it is difficult to understand, why, how and when it will work. And whether will work in general? There are convincing enough and detailed recommendations for choice the size, colour and some other characteristics of flies depending on a season, a water condition and so on. Really, it is possible to show change of preferences of a salmon on an example of an effective Shrimp fly. Big and bright in the beginning, it degrades to hardly appreciable orange or red element "tag" or "butt" on flies of 12-14 sizes. 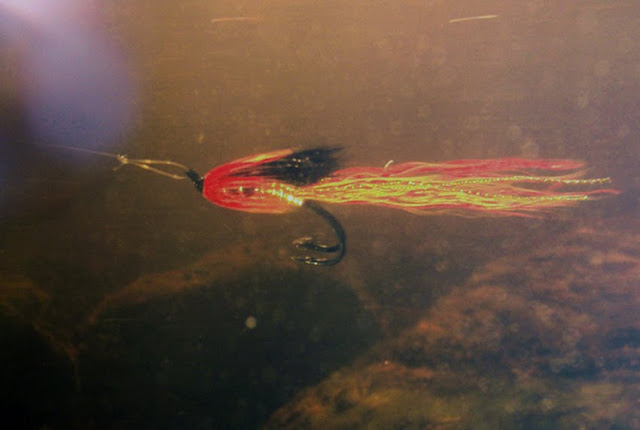 Technically fishing by ordinary wet flies and nymphs has advantage over pure salmon flies. Casting and the bait presentation is more important than the fly and its such private characteristics mentioned to a place and not so, as material game, a silhouette, colour, a transparency and many other things. In many respects fishing methods depend on density (floating - sinking) of a line. Increase of weight and power of salmon tackle results, with rare exception, in restriction of quality of possession of it. If to spread out fishing proces to components it is necessary to cast, give a fly into best position, to process the area or a direction, not to lose control over a fly and indicate a fish attack. Control which allows to translate all other qualitative parties of presentation in a quantity indicator - during correct work of a fly in water - is key. Experience of a wet fly technique offers these purely technical advantages of correct cast and control of position of flies. For some it sounds is paradoxical, but rather short cast by usual tackle can be much more productive than work by a salmon fishing tackle. Especially it is actual for the people who have not seized tops of shooting or a two-handed casting.
It is quite probable that it is necessary to appreciate more not cast range , not superfluous 2-3 metres which can sometimes play a role. It is more important to pay attention to a correct variant of a direction, speed of presentation and correction of movement of a fly.
And fly choice we need more logicall and consistent.The flexibility of tactics leading to success, consists not so much in search of the flies recovering interest of getting tired fish. The success consists in search of real model of a fly and its adequate presentation in water, after all the receptions usually used on our rivers, work and on the salmon.
Whether you agree, that on the salmon river grayling may be a good diagnosticum of a correct fly choice? Absence of fish attacks not only a salmon, but also graylings, sets thinking and change a fly. This supervision happens correct for salmonflies (let not for fully dressed, vaddinctons and tubes), especially it is correct for the usual. 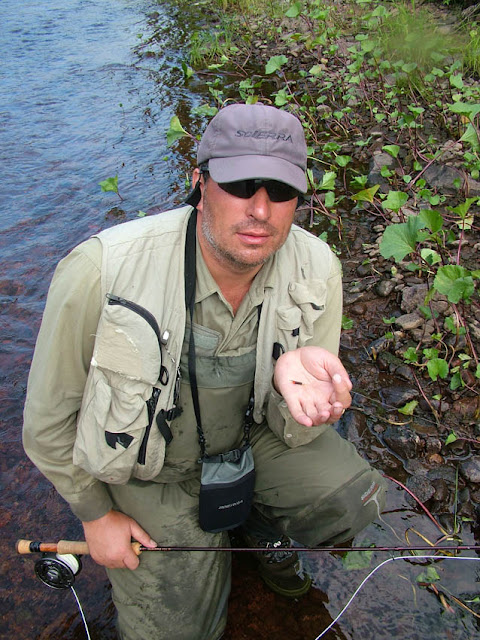 I offer possibility to be free of the scheme based more on aggression or seasonal activity, because of the inconsistent dogmas connected with it. And I suggest to use more clear component in behaviour of fishes - a food instinct and imitating flies corresponding to it.
In the imitating approach there is nothing new, at catching of a salmon expressly or by implication it is applied for a long time. After all the speckled feather gives effect of segmentation, wool is similar to scuds short moustaches and aerials. Gold pheasant topping creates illusion of a contour of a translucent body. Many flies have passed from a number trout flies, let the generalised imitations, in the salmon flies. Remember at least March Brown and Muddler Minnow. Return process is swept up also. Some salmon flies leave a category purely salmon. Losing in paints and decreasing in sizes, they come nearer to the natural prototypes stimulating appetite, instead of playing nerves. Estimating efficiency of flies, I want to result their indicative degradation from purely salmon to usual, sometimes fantasy, but more often close in natural organisms. 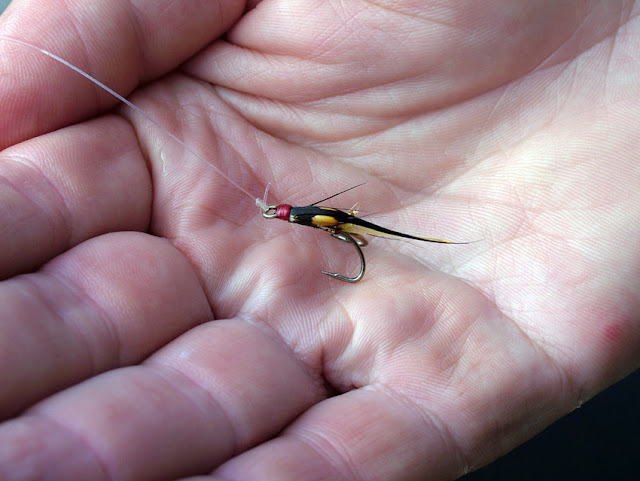 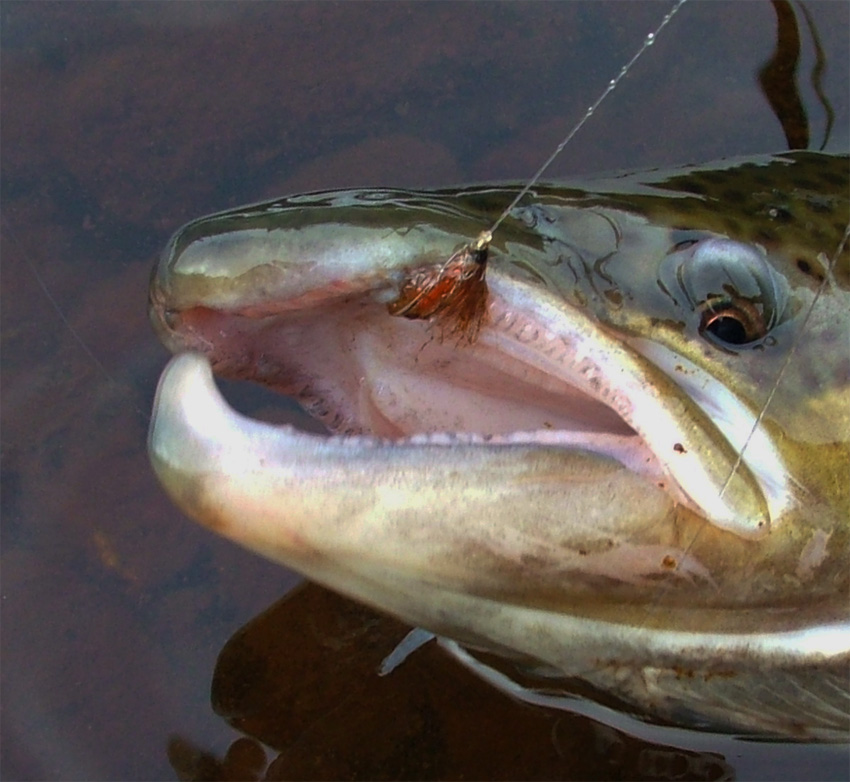 Later, reflecting already only on realistic flies, I purposefully fish salmon, being guided in an estimation of efficiency of baits by frequency og grayling attacks which was fed not far. My colleagues that were fishing with me but on salmon flies, helped me to correct results. On records I have restored the affectiveness of flies within a week of fishing. Certainly, these figures do not allow to do any thorough conclusions. But for me the fact of documenting of interest of a resident and silver salmon to imitations of insects and influence of presentation on atacks frequency was important. I alternated a method of "a wet fly" with "aggressive wet" and casting nymph downstream and across. On reaches, rifts and other places I tested serially 2 or 3 flies, replacing successful and trying the new.
Steams of flies
The Relation of number the grayling to a salmon
Estimation a salmon in a concrete place
T/S
Black Zulu Wet 1: 2 Stable attacks of a salmon
Orange Partridge Wet 2: 1 Interest changeable
Red Tag Wet 1: 1 Constantly well
Partridge&Orange Wet 3: 1 There is more grayling
Bead Head Pheasant Tail Nymph 1: 1 Took any localised fish
Olive Sedge Pupa Wet 2: 1 Works well, but it is not always constant
March Brown Wet 3: 0 Does not work on the sun
Olive Sedge Pupa Wet 1: 0 Interest is changeable
Bead Head Pheasant Tail Nymph 2: 1 Calls biting activization
Partridge&Orange Wet 0: 0 Absence of interest
March Brown Wet 1: 5 during a rain took each fish
Caddis Green Butt Pupa Wet 0: 0 Absence of interest
Brown Bomber Wet 2: 1 Half-heartedly
Green Sedge Wet 2: 1 Languid attacks
Stonefly Nymph Nymph 1: 3 Stable interest
Bead Head Caddis Nymph Nymph 1: 5 Took each localised salmon
Bivisible and silver Dry/wet 1: 1 Stable interesting
Red Tag variant Wet 1: 1 Constantly well 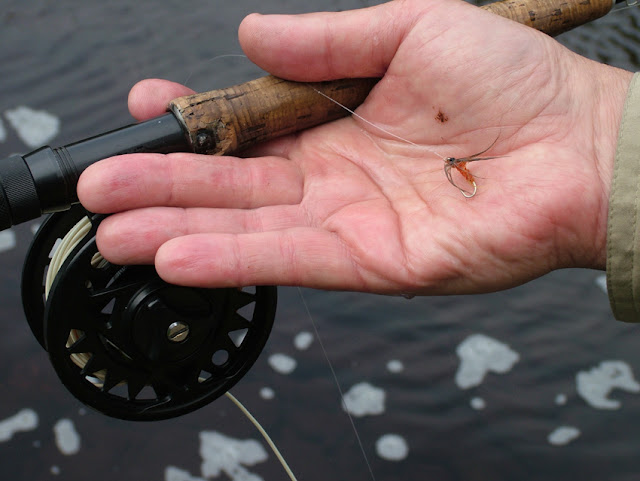 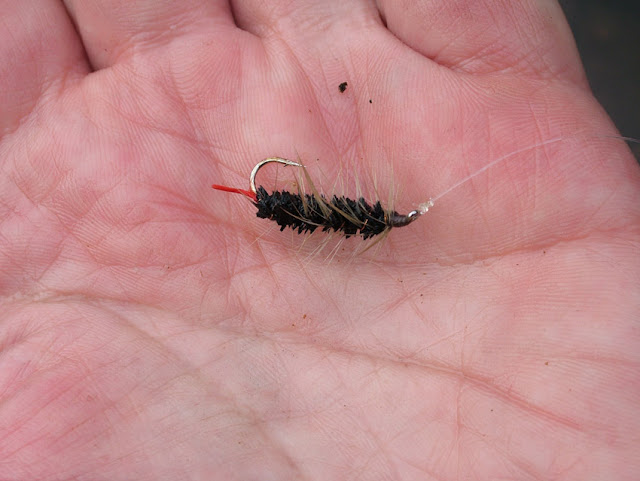