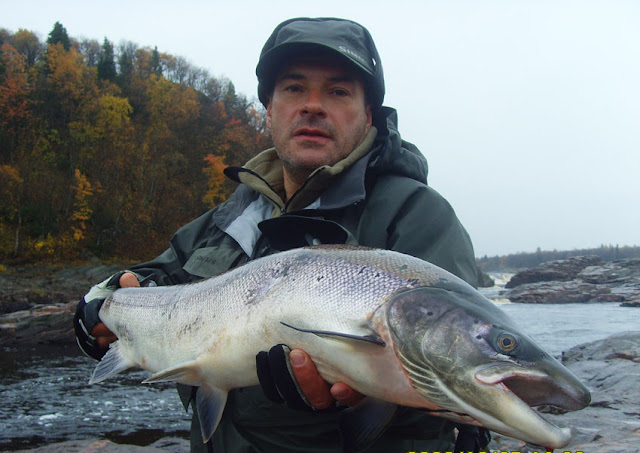 Chavanga`s salmons    every year. It is the river of the average sizes and runs into the White sea. It differs in character from the rivers of northern coast of Kola peninsula. The summer here is longer, and the river is convenient for  wading and fishing and is accessible to fishers on all extent. It is excellent range for fishing not only a salmon, but also for hunting for grayling and a trout. 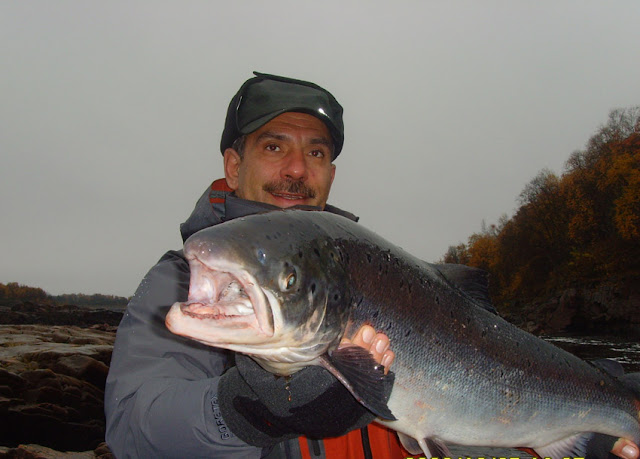 Here I collected a material for articles  for the Russian fishing magazines. The river is known   among the European fishers too. Some commands went here annually and caught fishes throughout many years. The river becames as native. Many places have received own names: bank,  coach tunnel, line stone and many other things. But in this knowledge one minus is covered - it would be desirable to see new places and to investigate the new rivers. Last years we tried to diversify our programs on the river. We put tent camp in upper part, left on the cross-country vehicle in hard-to-reach spots   on the river. Have once organised an alloy by boats from riverheads through all falls. But also it is not enough of it, something new is necessary now. 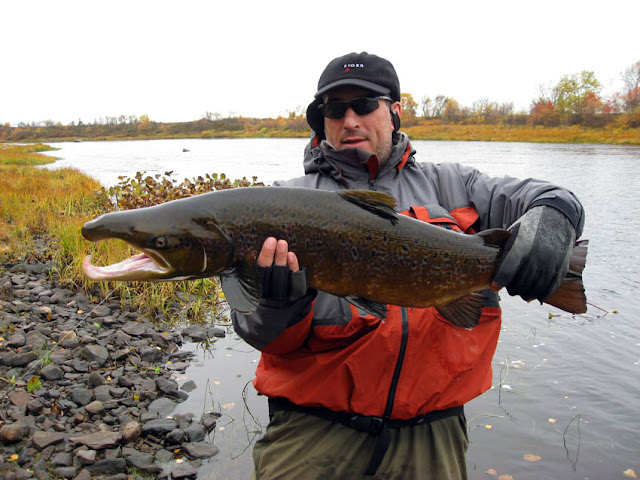 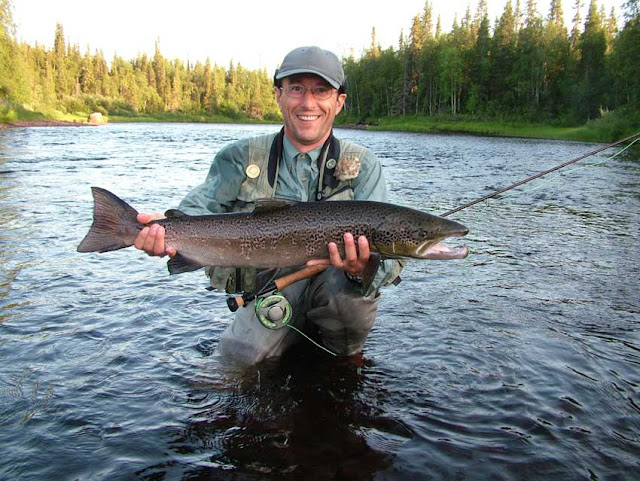 There is a  river absolutely another on spirit and aura. It is the river Strelna. Once for a long time I compared it to Chavanga. It was possible to tell that 17 km of the river Chavange outweigh all delights of the river Strelna. After all the best site on Strelna is located at the camp. But now I am ready to change the opinion. Earlier I came to Strelna with fishers incidentally, more often in the middle of summer. Now I work on Strelna the third year successively and that is important, I was here at various times, in the spring, in the summer and in the autumn. 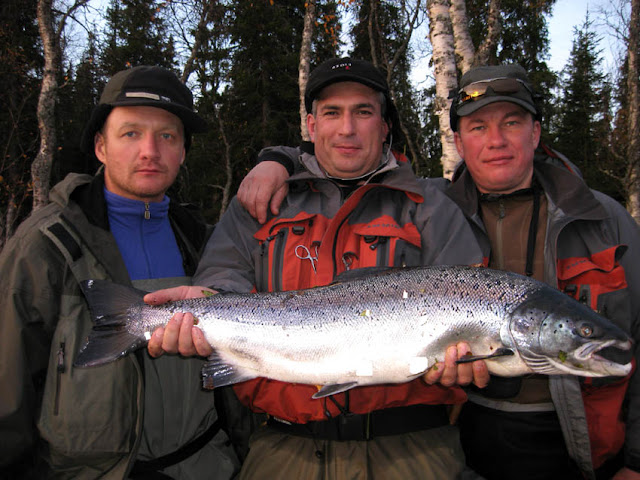 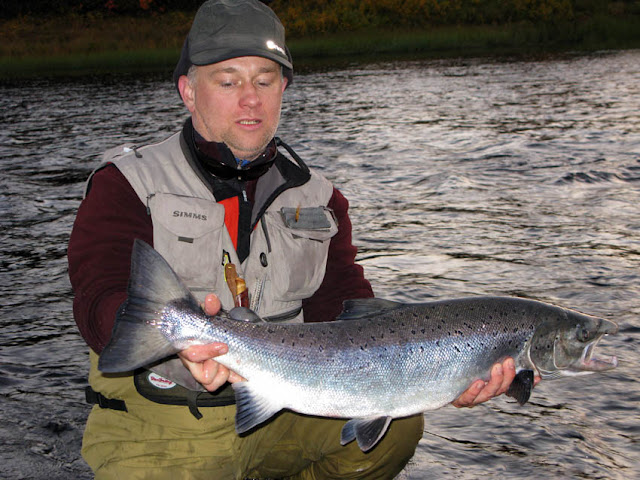 The river big enough even during seasons 2010-2011 which were extremely dry for all Kola peninsula. The river is considered 5th on size the river of Kola peninsula. I can not warrant that it is the deepest, but on a map the river looks really impressively. The river has two features. First it is located on the east further away of  Chavanga. It seems that the distance in 50 km is not too great. But it means that the autumn    salmon run  begins here for a week or on two earlier, than on the rivers located further to the West. It increases and so a short autumn season of fishing for a fresh salmon. Secondly, on Strelna in one and a half kilometres from a mouth there are falls. On Chavange I always considered convenient that the falls are located highly  upstream. To have 17 kilometres at the order it it is simple much to the European measures. Here on Strelna the high falls are located near to a mouth, and it in many respects defines a situation with fish in many respects. 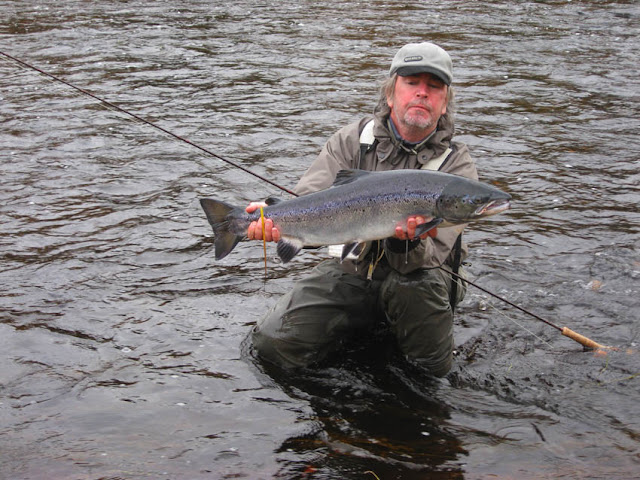 I suggest to consider a situation from a point of influence of a season on the river, from May and till October. In the spring the river has big enough weight of water. Its level rises on metre and more. At this time the falls become an absolute obstacle for a salmon. The set of fish gathers on a site below falls, in numerous holes and on reaches among rocks. This time, certainly, is one of the best for catching, only it is necessary, that the water level allowed to cast. Usually, by the end of May water falls to comfortable level, this time is called as the prime time, this most valuable time in a season.
In June the water level goes down, fish starts to rise on the river above falls. Now the new piece of the river becomes very interesting to fishing. For those who does not like to stand on one place, and likes to resemble and look at new places, it is very pleasant oppotunity. 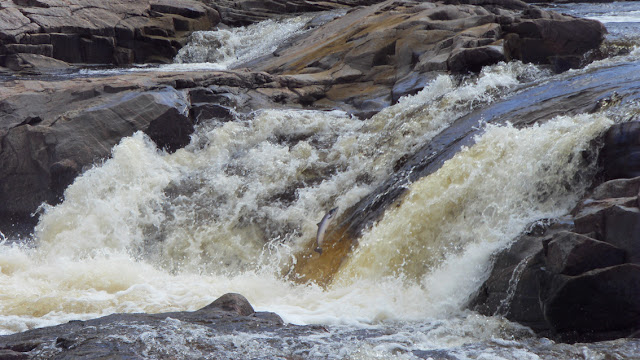 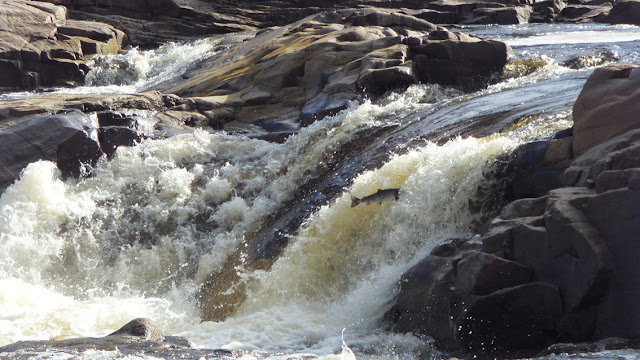 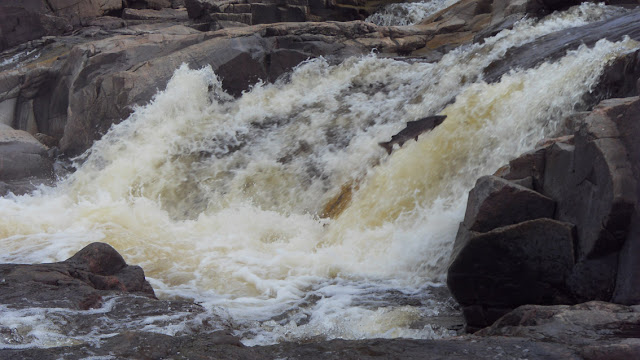 In the middle of summer, the river is easy to pass, and fish enters and rises upwards, as well as on other Kola rivers . That summer run of a sea salmon   can be intensive enough, we were convinced of the end of July and the beginning of August of this year. This year   water level was very low. For the rivers of the smaller size, such as my favourite Chavanga, a water level was simply catastrophic. The summer drought has affected and Strelna, but Strelna is bigger. Therefore, the salmon rose from the sea without problems. As an indicator of an intensive course of fish in the middle of summer (and it is absolutely atypical, for example, for the rivers of northern coast of Kola peninsula) may be our    statistics . My good friend Antonio  remained on the first hole from a mouth. He did not want to leave our elderly colleague it was already heavy to them to go on stones and rocks along the river. Antonio is the passionate fan of a dry fly, therefore he  fish salmons with a dry fly, more often - on imitation of sedge. From one place he has caught 16 fresh fishes and in addition some already darkening salmons. On small water it is possible to observe   how fishes take place  in rifts and rise up thrue waterfalls.


But the most interesting in the season is not middle, but its last third  part. Autumn salmon run begins with the end of August. Practice has shown that at this time especially large salmons more often enter into the river. They are females in weight from 8 kg and above. To catch such fishes  is difficult enough, ability and skill is necessary. Water becomes colder, the fresh sea fish enters into growing q-ty. . By the end of September we don’t need  to search   parking places of a salmon,   methodical work in places convenient for catching becomes the basic tactics of fishing. Fish rises upwards and will get a nose on our flies. In a season 2011 autumn favoured to fishers. The temperature fell imperceptibly, good weather conditions were saved all the October long.
The size of the river and character of coast demands a bit different tackle, than on Chavanga. Here it is possible not to hesitate and use heavy two-manual tackle all season. For spring and high water it is possible to use fishing-rods 9\10  and 11\12   class and lines with the sinking tips. The same tackle can be applied and in the autumn when the water level in the river rises after rains and covers coastal banks. In the middle of a season to use easier tackle looks  more correctly, including one-manual fishing-rods 8 classes with floating lines  .
Large fish comes across here, it is difficult to struggle with it among falls. Therefore it is not necessary to be afraid to use thick tippets. I feel quieter, when my fly is adhered on a tippet    diameter of 0.28-0.32 mm.
Flies pass same evolution. For catching on deep holes below falls, on wide reaches I think will be correctly to use large flies on metal tubes or  flies  with metal heads - cones. Among popular flies all the same - Ally ` s Shrimp, Cascade, Thunder&Lighting and so on. Fish loves a mix of orange, yellow and red colors. To the middle season when water temperature rises, it is better to reduce the sizes and brightness of flies. Sometimes modest flies of type Red Butt and others appear the best. I like flies with a black wing and only one bright detail. To it can be   Jungle Cock feather, or silver accent on a   body. Here many variants are supposed and we may   select a suitable fly more conveniently directly  on a bank.