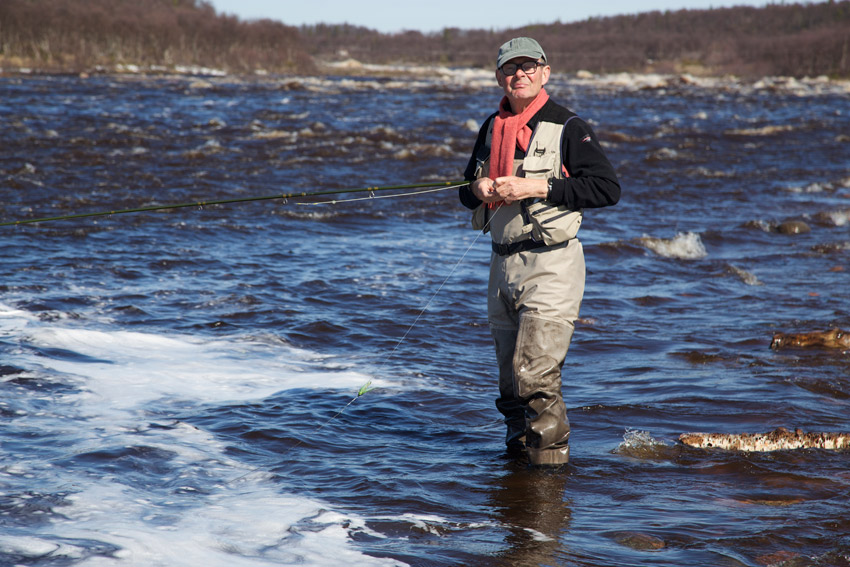 I found an article  by Paddy McDonnell   about the tactics of  salmon fishing in cold water. The article seems to me very interesting. I just want to add that every river and every season has its own peculiarities, and we just need to make adjustments in the tactics of catching and take into account the specific situation.


You can click on the link and see the original or read it here.

Or you can look at the forum

One of the most highly prized achievements in angling is to land a fresh spring salmon, and to accomplish this in the cold water conditions of early season is probably one of the most gratifying achievements of all. Some anglers associate early spring salmon fishing in cold water with the months of January, February, and the first half of March, but quiet often we can get severe cold snaps right through April also.
You must fish a big fly slow and deep when the water is cold in springtime.This statement has been handed down from father to son/daughter over many generations and is part of the lore of salmon fishing. Thousands of anglers over the generations have found this is the best approach, are they right? Today we have many advantages in terms of better fishing tackle etc, so are there any modern tactic’s that can replace the advice given above? How deep is deep? How slow is slow? and what size is a big fly?.
When an experienced angler or ghillie passes on some advice to help solve a particular fishing problem the recipient must trust that it is based on personal practical experience. Better still if the advice can be supported in some way by any relevant scientific studies, then the angler can fish with the extra confidence, and persistence that is so vital when searching for that elusive early Springer in cold water conditions.
Luckily for us the effects of water temperature on salmon behaviour have been studied by MH Beach in the early 1980s, and some of the results were published in the early 1990s by the Scottish Fisheries Department in their document – Notes for Guidance on the Provision of fish passes and screens for the safe passage of salmon. 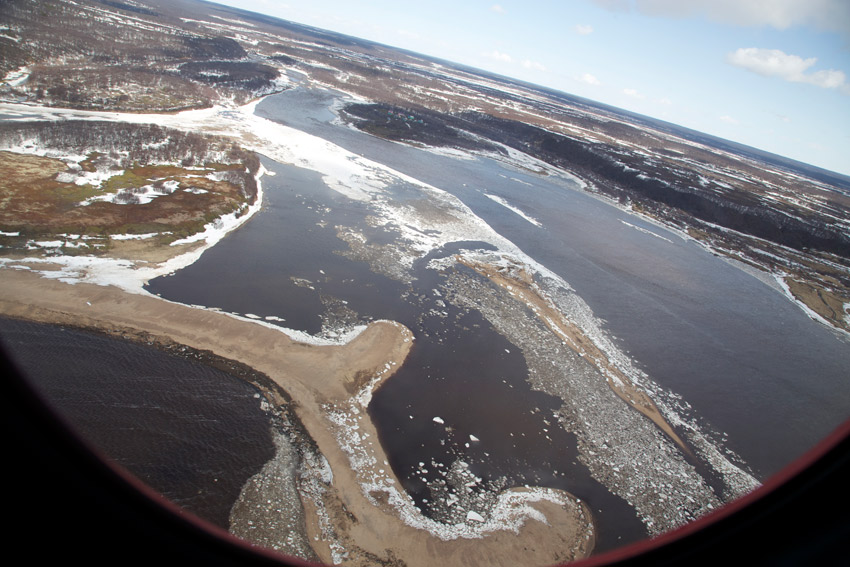 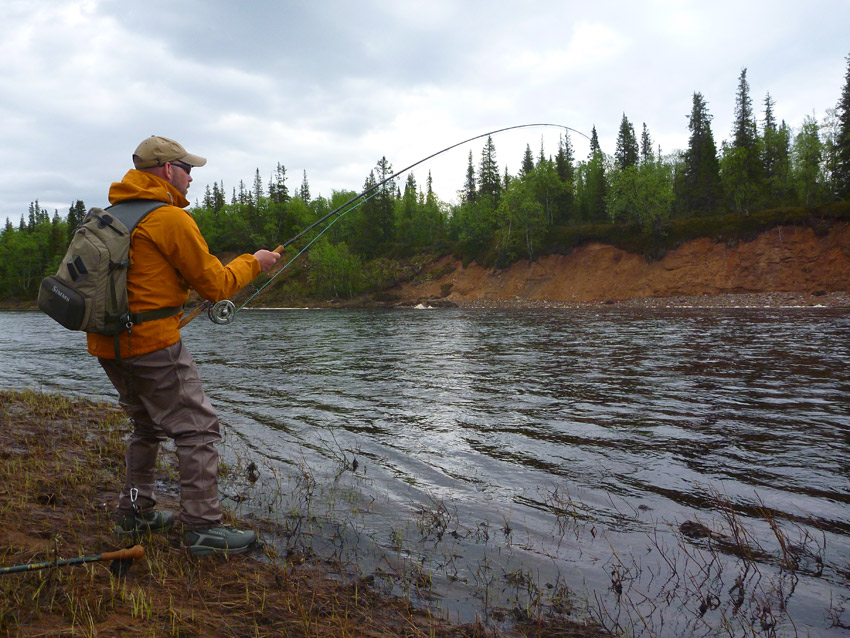 Through trial, error, and practical experience (when all is said and done there is no substitute for practical experience) our forefathers had it right about fishing slow and deep in cold water for salmon. The study also supported the observations made by previous generations about the reluctance of salmon to negotiate stretches of rapids or waterfalls in cold water conditions, with the fish normally waiting to run until the water temperature reached at least 5-6 degrees C. With their maximum swimming speed severely restricted in water of 4 degrees C or less the salmon have little choice but to wait. These rapids or waterfalls became known as temperature barriers, and the pools where the salmon rested waiting for the water to warm up became known as temperature pools.
When choosing which salmon fly to use in any given situation we must consider what it is we are trying to achieve. The first objective is to create a reasonable impression of a living, vulnerable prey item which will have an impact on the fish. The second consideration might be the profile of the fly, slim tubes, and hair wings suit fast currents whereas Irish shrimps are best used in moderate to slow currents. In fast water the salmon gets less time to see the fly so you might choose a bigger fly, and conversely in slower water a smaller fly might be enough to create the illusion of life, and guard against creating too strong of an impression, or impact thus maintaining the holy grail which in my opinion is a fly that is visible, and vague at the same time!. There are other considerations also, such as in coloured water we might use more colourful flies, in slow currents we might consider flies tied with extra soft mobile materials, as they will be hovering close to the fish for longer, and this may help in the deception. The main reason big(and sometimes colourful) flies are successful for salmon in cold water is the strong impact they have on the fish whose metabolism has slowed way down with their senses dulled slightly and this is what it sometimes takes to wake them up. Yellow (especially fluorescent yellow) is a great colour in cold water, and is the dominant colour in many of the great traditional, and modern cold water salmon flies. One of my favourites is the gold Willie Gunn, tied with proportionally extra yellow hair for coloured water, equal amounts of yellow, orange, and black hair for normal conditions. For clear water I like a standard Willie Gunn (black body, gold rib) tied with more black hair than yellow, and orange. 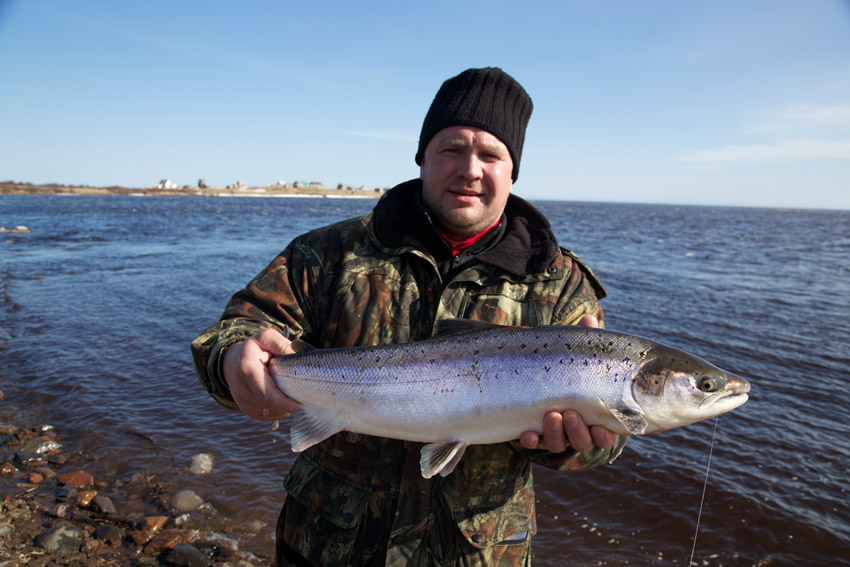 Every spring salmon river system has its own local favourite flies, and it is usually wise to include them in your armoury, just make sure you have them in large enough sizes for cold water fishing. Big flies in my opinion start at about 2inches overall measurement up to about 6inches with 3-4inchs being the most commonly used sizes, and there are some anglers who occasionally use flies (usually sunray shadow’s) of 8-10inches long. Three or four favourite patterns in different sizes tied on plastic, aluminium, and brass tubes are usually enough to take with you as cold water spring salmon fishing is not the place to be experimenting with variants of established patterns, because when the going gets tough doubts creep in, confidence flags, much better to stick with proven original patterns that have stood the test of time.
Some of my favourite cold water salmon flies, A 2 inch Gold Willie Gun, A 3 inch Silver Grey, A 4 inch Cascade, and a 6 inch Sunray Shadow, all on tubes 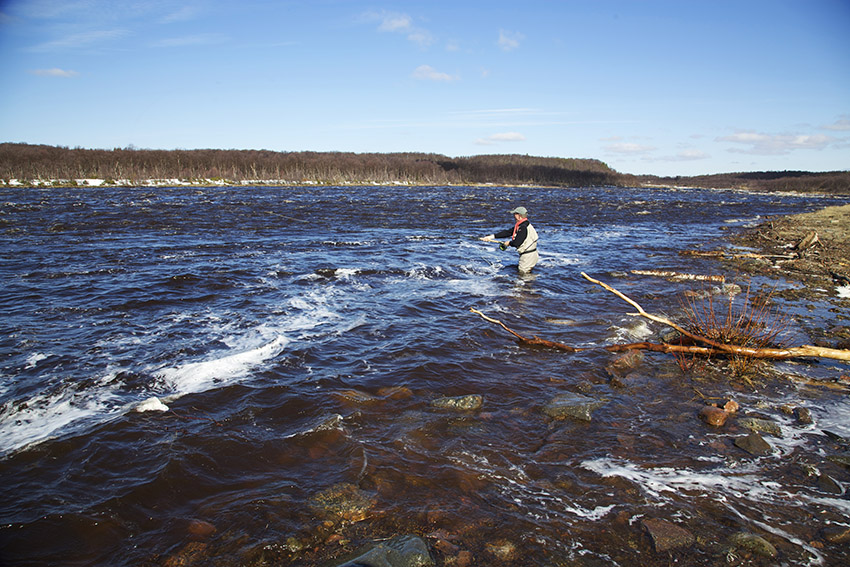 Lethargic cold water salmon need the fly to be put in their face to wake them up, and this means swimming it at1-2 ft from the river bed. Regardless of skill level when we fish this close to the bottom there are going to be flies hung up and lost, in fact if we fish the whole day without hanging up, and losing the occasional fly then we are probably not fishing deep enough. We use various sinking fly lines to get down, and swim our fly close to the fish with a balance to be struck between choosing a line that sinks too much constantly snagging bottom, a line that never snags at all presenting our fly too far above the fish, or the best compromise, a line that causes our fly to tick bottom regularly enough to make us feel confident that we are bumping them on the nose.  Nowadays we are spoilt for choice with the range of different sink rate fly lines available to us. There are full sinking lines, and wide choice of density compensated, or sink tip lines which should help us cope with most situations. Type 2, 3, and 4(inches per second) sinking lines are probably the most useful, but its no harm to have an even faster sinking line with you to cover all eventualities. I prefer to use lightweight flies with my sinking line as they retain their lifelike appearance even in slow currents, but if my fastest sinking line isn’t getting deep enough then I will use one of my brass tubes to reach the taking zone.  Leader lengths can vary from 3 ft for the deepest presentations, up to 6-8ft for clear water situations. Monofilament breaking strains of 20lb, or more should be the norm as our leaders will be in contact with the river bed and rocks many times during the day. Every time we snag up on rocks, or whatever, it would be wise to check for any signs of abrasion, and replace the leader if in any doubt.

Sometimes when fishing deep in very rocky pools a full sinking line can get hung up a lot, because it tracks relatively flat as depicted by the orange line in the diagram above. If we use a sink tip line instead as depicted by the blue/green line, we may dodge some of the snags as we work our way down the pool.

In cold water the salmon’s metabolism slows down so we fish our flies as slowly as possible. The more of an angle we cast down and across the river the slower the fly will come around, however if we need to get extra depth (especially on the far side of the river) we can make a reach mend upstream after we make our cast, and as our fly line is unrolling out in the air over the river, as depicted in the diagram above. Another wrinkle to add to this is to have some spare loops of line retained after the reach mend so we can roll or shake out extra slack to achieve even more sink time before the current starts to tighten up, and fish our fly across. If that’s not enough we can always take a step downstream as well!!
Salmon taking the fly in cold water often take so gently that its as if they just slowly grow on the end of the line, and as the slow deep throbs grow stronger we immediately seem to forget all those fishless hours, and aching cold limbs. Some experienced anglers just clamp the line on the rod cork, and wait until everything tightens up before lifting into the fish; others set the drag on their fly reels on a light tension (just enough tension that it doesn’t overrun) and allow the fish to take a couple of yards of line of the reel before lifting to set the hook, either method is good. 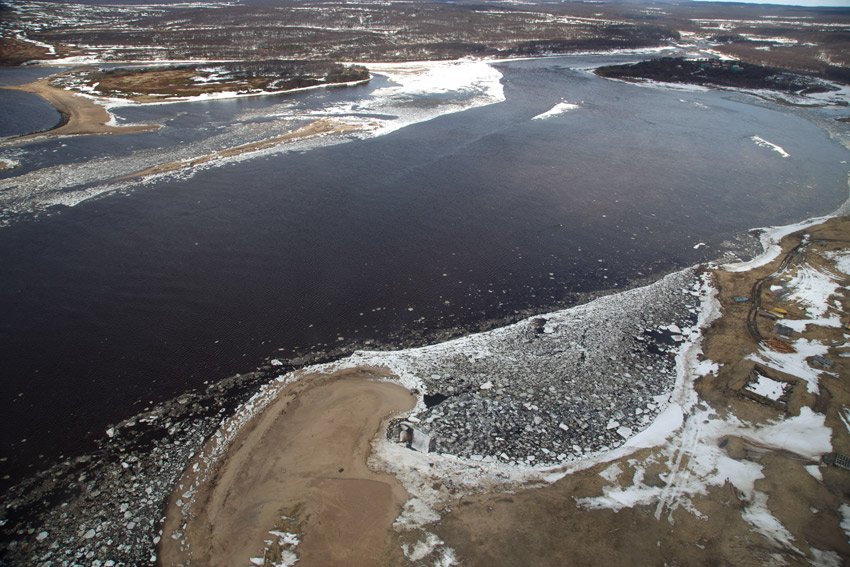 In cold weather the middle part of the day is usually best as whatever sun maybe shining will have had time to hopefully raise the water temperature a little, and encourage the fish to take. Anglers who regularly catch spring salmon on the fly especially in cold water conditions, are not just lucky, they consistently present their flies accurately in difficult conditions, and persist when others have thrown in the towel.  Later on when the water warms up, and reaches temperatures of 6-12C, the salmon will be invigorated as this is the temperature band which suits them best, allowing them to once again reach maximum speed and reclaim their glorious title. Salmo salar -The leaper 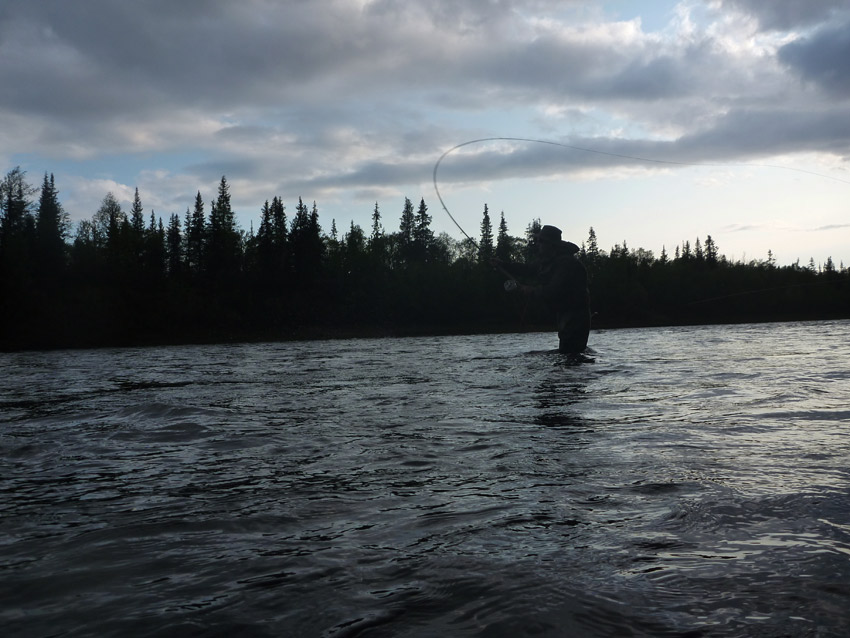 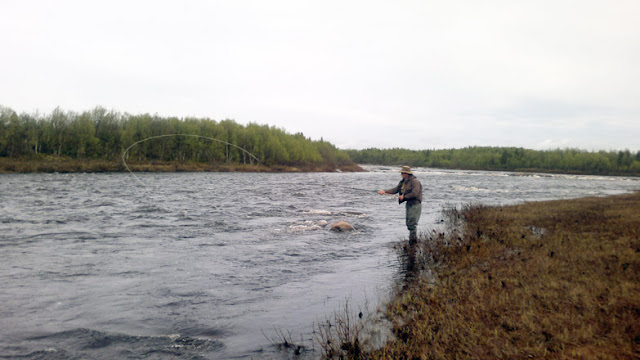