Promotional offer for trophy salmon fishing on the river Strelna! 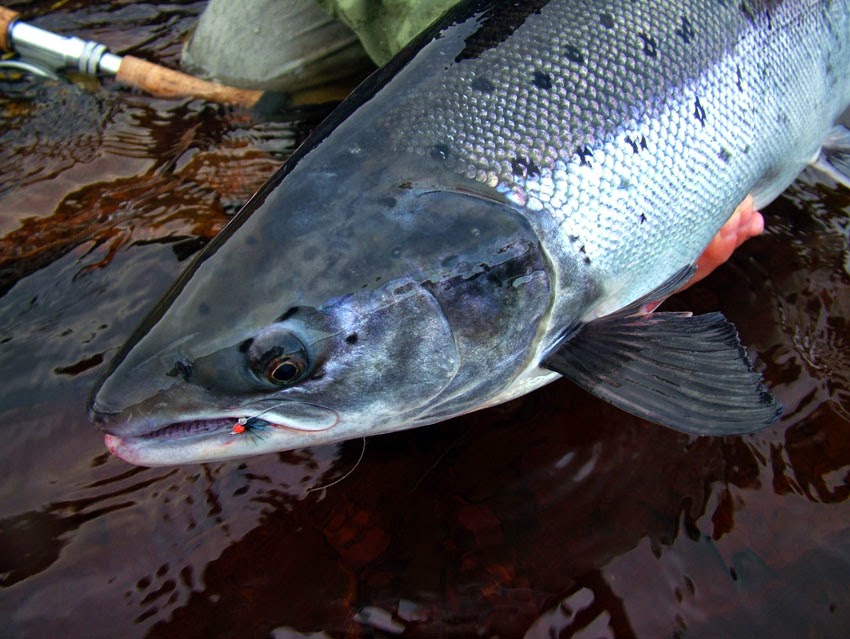 I want to offer you a special two weeks for salmon fishing   on the river Strelna,  on the Kola Peninsula in Russia. Each river has its own special week ,  special time for salmon fishing . These special two weeks - last week of August and first week of September is characterized by the fact that begins fall salmon runs in the rivers of the White Sea . At this time,  especially large salmon that reach 8-12 kg weight  comes here . It's not the easiest week for salmon fishing . They are not like a week in prime time - at the beginning of July or at the end of September. In the last week of August in the river comes not so much salmon as  in early October. But salmon is quite a lot and really  the biggest fish comes in late August , early in the northern autumn. Another advantage of these weeks - the relatively low cost of the camp at Strelna and respectively - the lowest cost of the tour. The first week ( Week 35 ) starts from 28.08 and ends 04.09 the second week (36) starts from 04.09 and ends 11. 09 . Accordingly days of arrival at the airport of Murmansk - 27.08 and 03.09 . If you are interested in this offer - please,  contact me. Good luck ! 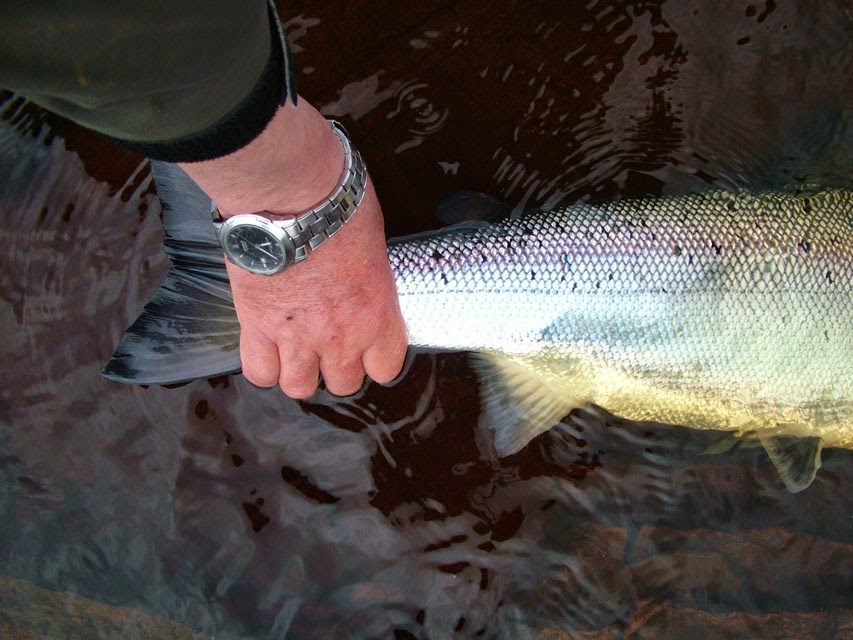 This river is located in 50 km to the east from Chavanga river. Strelna is considered as the large river, it is the fifth biggest river on Kola Peninsula. Certainly, the size of the river from the point of view of the fisherman, depends on season. The spring high water in the beginning of May, carries a large amount of water, but and in the middle of summer during dry time, it is a little water, and the river is accessible on all sites.
The lower part of the river, close to the seaside is wide and spacious, with the very accessible banks. First half of mile from the seaside, the river flows through rock and mountains. Here are the set of picturesque rocks and falls. River banks are firm, rocky, covered with large stones and pebble. Water carries hardly a brownish, "tea" shade. But in a dry season water almost colourless. Futher up the river, after all the falls and rocks, the valley extends and the river becomes quieter, stone rifts and fast current streams changing each other.
Fishes

The Atlantic salmon and sea trout regularly comes into the river. These are the kinds of fish, fishermen coming here for. Plenty of graylings and a local brown trout who reaches the large sizes and quite interesting to catch for the fishermen.
Population of a salmon in Strelna reaches the considerable sizes. The river is quite far from the closest local village so there is a minimal chance of poaching. As well as on other rivers running into the White sea, the fresh income of salmon becomes pretty usual thing. The biggest amount of fresh salmon is taken place in the autumn, September and the beginning of October and Spring in the end of May and first half of June. But there is also a summer course of a salmon, sometimes intensive enough. The largest fishes enter the river in the spring and from the end of August when it is possible to catch copies more than 10 kg in weight. But fish is in the river all season and at any time it is possible to catch a salmon. The prime- time for salmon is considered from 15th of May till 15th Therefore it is very convenient to fish directly near camp, within the lower part of the river. This time also estimated more expensive. The second peak of salmon fishing comes in September. From first weeks of September, autumn fish, which differs special physical standards, begin to come to the river.
Separate interest is represented by fishing the sea trout. The sea trout here is a the typical sea form of silver colouring and the local form which differs brown colouring and large black stains. During the best time when high water falls down, trout of 2-3 kg come across, large fishes to 4-4.5 kg in weight are considered. The end of June - July are considered as the best time for fishing the large trout. In August the size of a trout begins to decrease, but at this time, fresh salmon comes to the river increasing the population of sea trout. By the end of August, and in September fishing the trout goes on recession. Therefore as the best time for hunting for a large trout consider the end of June - July.
Thus, it is possible to combine fishing the salmon and a trout or to choose purely trout variant in the middle of summer.
Camp

The camp Strelna is located in a picturesque place on Island in delta decks at the sea. Distance to the coast is around 300 metres, to the river - less than 100 metres. The camp consists of 4 wooden houses, in each of them 3 rooms for clients, shower, toilet, a room for drying and the furnace are located. Each room accommodates 2 fishermen. Houses are equipped by electric heating of water. The dining room is located in a separate structure, the lunch hall is equipped with fireplace, bar with alcoholic drinks, TV and others. Nearby, there is a kitchen. The spacious bath with a sweating room is constructed here, on river bank.
The fishing organisationTermsThe fishing season opens since May, 15th. The season end legally is not limited, depending on weather conditions it is possible to finish a season in the middle of October. CapacityThe camp contains up to 10 fishermen. The standard group at the beginning of the season is 10 persons. In the middle of a season, group usually consists of 7- 8 persons. Groups with smaller quantity of participants are accepted after the coordination of details with the organizer of tour. Duration of tourStandard tour is consider as 6 + days of fishing. Recommended day of arrival and departure is Wednesday. Under individual demands duration of tour can be prolonged or reduced. TransferThe camp is in 50 km to the east from Chavanga river. Approximately the distance from Varzuga mouth makes about 90 km. From Umba river, the distance is around 230 km. To get to the Strelna camp is possible by the helicopter, by the truck or the powerboat by the sea. The approximate plan of transfer looks so:
The tour includes:
Tour doesn’t include:
Mixed programs

We offer you the mixed programs including fishing on the river Chavanga and on the river Strelna.
It allows you:

The mixed programs usually include some days of fishing on the river Chavanga and week on Strelna. Usually, these programs are popular in the middle of a season when they become more accessible at the price. Their basic advantage is possibility to correct the program on a place, having prolonged or having reduced fishing terms on Chavange or on Strelna. Here it is possible to consider an individual condition of the river directly during tour.