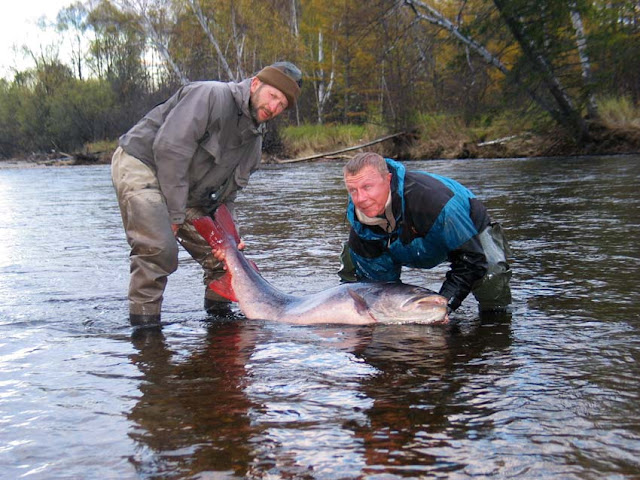 Taimen fishing is one of the most exotic directions in fishery. First, involve on the present the huge sizes of fishes. Secondly, the territory of catching of these giants so is far from the bothered lawns on a highway roadside that never becomes boring and monotonous. Till now a trip on taimen presents a real adventure. Agree, what not so remains places where it is possible to receive rare pleasure from really protogenic nature.
Here photos of my friends about hunting for trophy taimen for some last years are presented. The fullest information on taimen fishing is stated in Michael Skopets's book "On Far East with fly". From this book I have received many good advice

Here the small review about the tackle necessary for catching of this huge fish..

On large fish it is necessary to prepare tackle corresponding on capacity. To use grayling fishing-rod it is not necessary. For struggle with taimen in most cases will enough have an one-manual fishing-rod 9 or 10 classes of capacity. But even such fishing-rod is not always capable to throw large baits well. To fish hucho often it is necessary in difficult conditions. The rivers not always allow to move freely on coast or on small water. Often best sites are located at steep coast, on turns of the rivers, under blockages of trees. In such places it is difficult to approach close to fish, there is no free space for a cast over a head. In these cases two-handed fishing-rod helps with cast style as roll and spey. Fishers who possess this cast technics , can successfully catch in absolutely inconvenient places. Michael told about his rods so: he has 2 two-handed fishing-rods. One 15 foots it uses 10-11 classes with a floating line. To it the sfast sinking leader of 4,5 metres in length is added. He uses this tackle at average speed of a current and depth approximately in 2 metres. Other, easier fishing-rod in 14 foots of length, is equipped 12 metre by quickly sinking head. Michael uses it for catching on depth more than 3 metres. For night fishing on the mouse, a fishing-rod it is equipped with a floating line and a nylon leader. 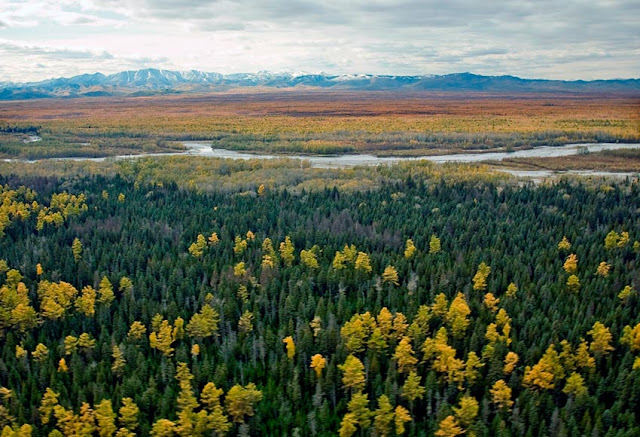 More often taimen fishing is more convenient from a boat then it is possible to manage one-handed rods and a set of shooting heads. The standard set - the floating head, slowly sinking and fast sinking suits. The tippet for fly is necessary to have durability from 22 to 28 pounds.
The majority of the rivers where meets large Hucho are wide enough and powerful. On the small rivers in 20 or 40 metres in width it is possible to catch from bank or to come into water. But on larger rivers to do without the boat it is impossible. Many best places for taimen are located under river breakages, in deep old channels of the rivers. It is possible to compare taimen fishing to pike catching. Michael says that the pike well approaches for training. Both these fishes prefer baits of the large sizes, both do not refuse to attack mice. And a pike, and taimen often settle down in deep, quiet places. Both at taimen and the pike has a rigid firm mouth, therefore it is necessary to train itself to do the second strike.
Flies for taimen about same, as well as for pike fishing. Large baits are necessary because fishes seldom pay attention to small baits. Taimen eats large salmons to 10 kgs in weight and even larger. Therefore a bait it is possible and it is necessary to use as much as possible large what only can sustain your fishing-rod. 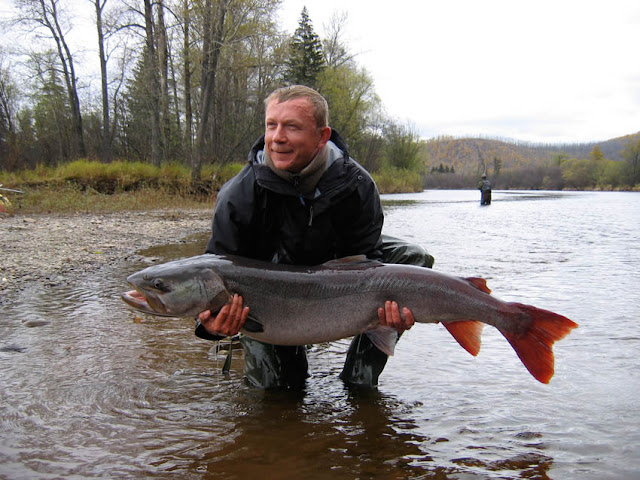 Unlike a pike, taimen often suffices a bait for a tail, attacks a bait behind. Many pike flies have a hook in a forward part and, therefore, there are many empty attacks of Hucho. The long hook or a fly with an additional pendant treble or a hook is necessary. Flies for taimen - it is large streamers, poppers and mice on hooks in the size from 1\0 to 4\0. The length of these baits from 10 to 20 sm, will correctly to weight a head part of a bait.
Style of tying of such streamers the following: it is possible to use style matuka or zonker. The bloodsucker or a flexible bloodsucker in various kinds reminding a forage of all predators - a lamprey perfectly works. The most simple imitation of a lamprey is the strip of dark fur adhered to a large hook. Such design is simple. But more often the fur strip is twisted round a hook and twists a fly. Therefore it is better to do all large flies jointed, to do of two parts with the weighted head and a hook in a tail part. 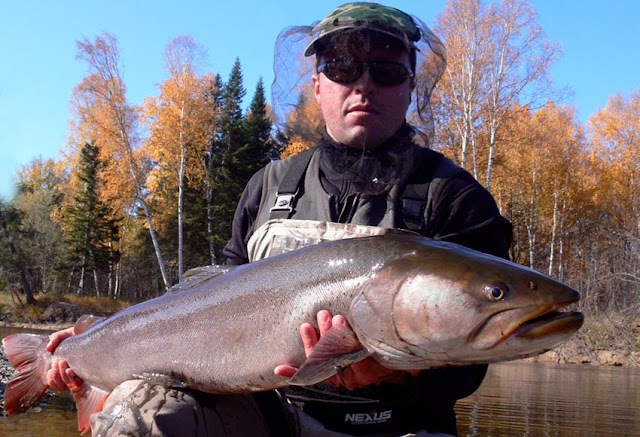 Effective bait is also the huge squid. To make this bait it is possible from two parts, it is possible on a tube too. Small beards of a feather of an ostrich have considerably smaller resistance in water stream than a marabou feather. At the same time the feather of an ostrich creates visibility of considerable volume. So it is possible to make baits of the big size, but suitable for fly casting .
One more fine bait - a fly named Intruder. This fly at rather small resistance in water can have the big sizes and good game. It involves even passive predators.
In the summer taimen it is possible to catch on flies of any colour. Colour of a bait depends on a transparency of water and colour of the present prey of taimen. At catching in transparent water in the middle of summer it is possible to catch on the superficial mouse. At water temperature above 6-8 degrees fish leaves up to a surface. We use different large mices made from deer hair of wool and other floating materials.
In the autumn when water of the rivers carries fallen down leaves, white and yellow streamers stop to work. During this period Taimen involve more black or black-brown baits . 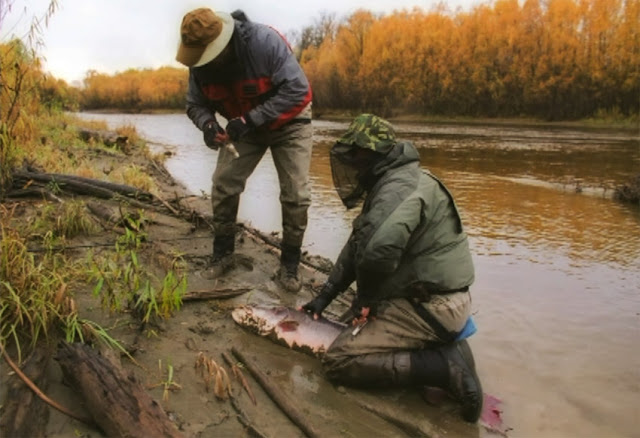 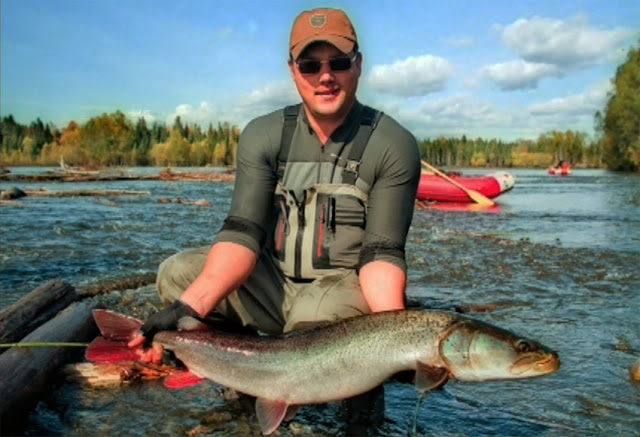 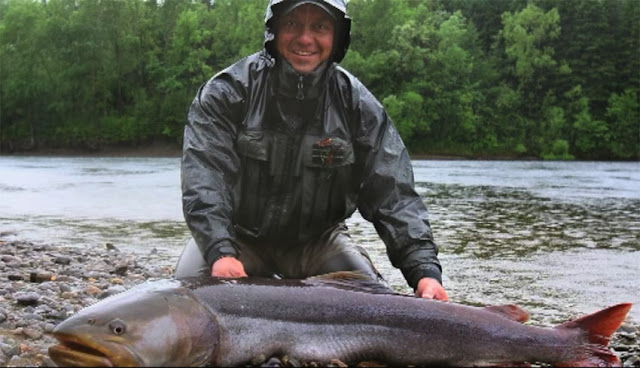 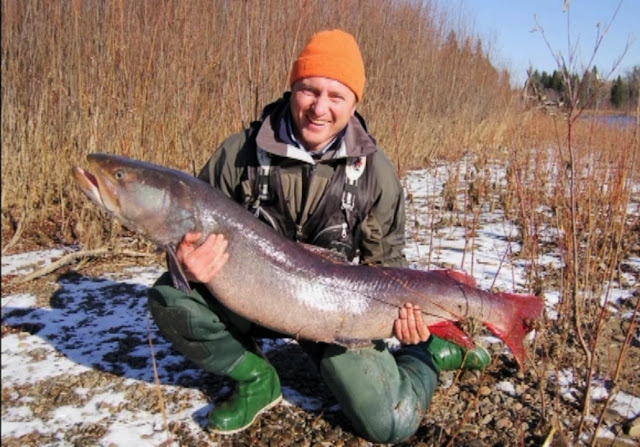 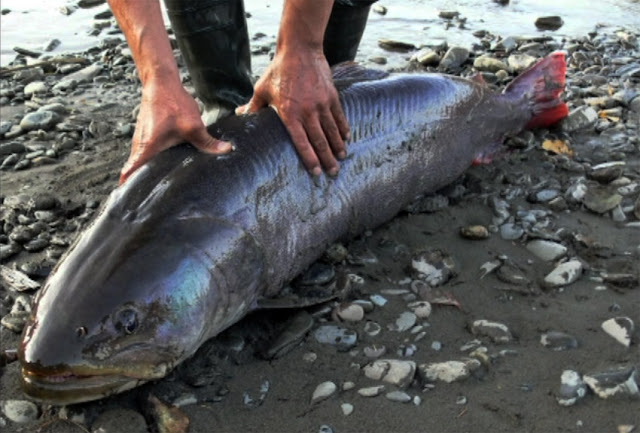 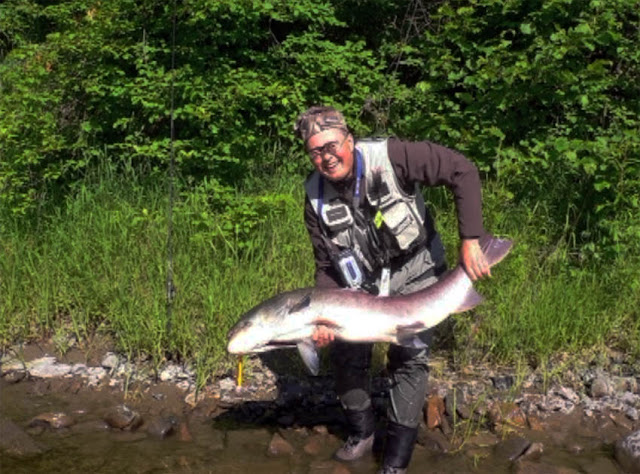 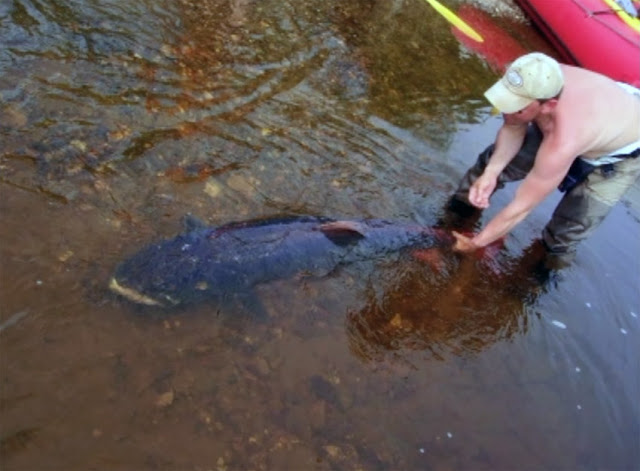 Every week i will add more and more photos of taimen fishing and giant fish. All the best!